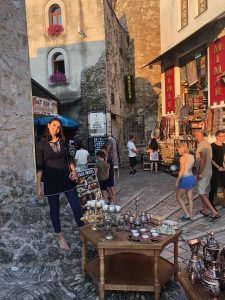 This summer, I participated at the Burch Field Research Seminar on conflict resolution and institution building. We studied the resulting conflicts and wars after the breakup of Yugoslavia and focused on the post-war international intervention in the region. Our program was split between the Balkans, where we got familiarized with the region we were studying and attended briefings in a lot of international organizations, and Vienna, where we spent our days with classes and writing up our research papers.

Before this program, I was very curious to understand the dynamics of international organizations and diplomacy. Going into a complicated region such as the Balkans where so much international intervention took place was an incredible case study to get that insight. It made me realize that domestic and regional politics influence the work and enforcement capabilities of international organizations. Having so many actors and foreign interests sometimes makes the issues even harder to resolve. I also realized that every conflict is very specific to its own and is influenced heavily by the geopolitics of where it is located. For example, the conflicts in Bosnia and Kosovo both stem from ethnic and religious differences and is intertwined with their history and yet had so many differences in how it played out. Every international issue is very complex and multilayered, so understanding the dynamics requires a broad knowledge of a lot of factors and history.

We spent around two weeks in Bosnia and Herzegovina, and one week in Kosovo both of which lived through wars during the 1990s, and we looked at how the international organizations played a role in conflict prevention, institutionalization and democratization efforts. The organizations we visited covered a wide range of different fields with a lot of overlapping roles: For example, in Bosnia and Herzegovina we went to a couple of OSCE field offices where they have branches that work from democratization, rule of law, election monitoring to education and community building; the EU where they guide the country in EU accession steps; and NATO which monitors the safety, military activities and demining etc. While most organizations had areas where they could work together, I was surprised to see the lack of cooperation and between organizations and the inefficiency that rose from that. These visits were mostly filled with mixed feelings of questioning the legitimacy of the efforts and intentions of the organizations but also not knowing how things could have been done better instead.

Finally, on the cultural side of things, I was really happy to be in the Balkans where there is so much historical diversity. Both Sarajevo and Mostar (cities in Bosnia and Herzegovina), and Pristina (the capital of Kosovo) were former Ottoman towns that later became Yugoslavia following the falling of the Ottoman Empire. As a result, the cities were a mosaic of Ottoman architecture with historical marketplaces, bridges, mosques and old houses, and later built modern buildings. I was overjoyed to see that cultural mesh and was also able to see glimpses of my hometown Istanbul which I had not anticipated before going on the trip.