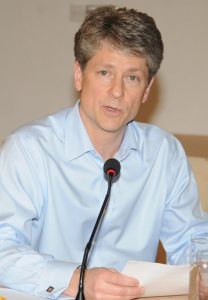 Marshall Mills received his Bachelor of Arts from UNC Chapel Hill in International Studies with a concentration in Economics in 1986. Mills remembers feeling that his undergraduate course selection was a little scattered until one day his advisor, Professor Florin, summed it suggesting that his thematic focus was the “global challenges facing Western society.” Supported by a Morehead scholarship, Mills travelled to East Asia, worked at the British Parliament, took Russian classes in the then Soviet Union, and studied rural development for a semester in Kenya. There “I managed not only to gain insights into rural poverty – which still help my work today — but I also feasted and danced with the Maasai! Back then, realizing some of these experiences took a lot of finagling, and I am impressed with all of the opportunities now available at the University.”

After graduating from UNC Chapel Hill, Mills received a Woodrow Wilson Fellowship from Princeton University, where he eventually received a Master’s in Public Affairs in 1989. In 1992, Mills received a Post-graduate degree in Public Management from the “Ecole Nationale d’Administracion, France’s National School of Administration.

Marshall Mill’s professional experience is vast. He began in 1990 as an Economic Analyst at the Office of Management and Budget in Washington, DC. From 1993 to 1998, Mills worked as an economist advisor to the General Secretariat of the Organization for Economic Cooperation and Development in Paris, France. From November 1998 to August 2005, Mills served as Director and Deputy Director in the Office of Middle East and North Africa at the U.S. Department of the Treasury.

Since September 2005, Marshall Mills has been working for the International Monetary Fund. His tasked have ranged from Senior Economist for IMF negotiations in Mali and Ghana, Mission Chief for Togo and Congo programs, and Deputy Division Chief of the Strategy, Policy and Review Department. Currently, Marshall Mills serves as Mission Chief for Madagascar and Seychelles Division of the African Department. Mills recently negotiated a 3-year IMF program for Seychelles and Madagascar.

Marshall Mills is greatly thankful for his opportunities at Chapel Hill. “UNC really opened up the world for me. I took advantage of every opportunity to travel and learn about international issues.”