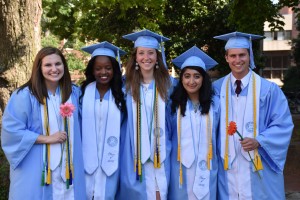 The Curriculum in Global Studies held its Spring 2016 commencement ceremony on Sunday, May 8, 2016 in Memorial Hall. It was a wonderful celebration of more than two hundred students graduating with a bachelor’s or a master’s degree in Global Studies. It was an especially notable occasion as it marked the graduation of the first cohort of our new Global Studies MA program that launched in the fall of 2014.

The Curriculum alumni, faculty, and staff have much to be proud of this year. We reflected on some of the wonderful accomplishments of our students on campus and around the globe. Students participated in conferences, pursued internships, led student groups, worked in the community and studied abroad in all four corners of the world. Seven graduate students received Foreign Language & Area Studies (FLAS) fellowships. Twenty-three Global Studies students were inducted into Phi Beta Kappa.

Dzidzai Muyengwa stepped gracefully into the role of student speaker at the ceremony. She spoke proudly of her own global roots and of her goal in life “to live beyond myself, to explore my identity as a global citizen, and to engage with our global family.” Dzidzai now calls Roanoke Rapids, NC home; her family immigrated to the United States in 2007 from Zimbabwe. She spoke of her great appreciation for her time as a Tar Heel and as a Global Studies student, and reflected on the empowerment she felt after viewing documentaries in Global 210 that kindled in her a passion for justice and a sense of hope.

Jessye Halvorson received the prestigious Douglas Eyre Award for Excellence for her senior honors thesis, “A Case Study of Global Brigades.” The Eyre Award is presented to the undergraduate judged to have written the best senior honors thesis in Global Studies. Jessye’s thesis was also awarded highest honors. Her faculty supervisor was Professor Mark Sorensen in the Department of Anthropology.

Dr. Michal Osterweil, the director of our honors program this year, explained, “It was such a privilege and pleasure to get to work with four dedicated students and to watch their work evolve. They each worked so hard, and were so supportive of one another. In addition to their great academic accomplishments, they were such a generous and kind group. And I don’t recall it ever happening that ALL of our honors theses received Highest Honors. Having read all of the theses, I can say that they not only deserved the status, they were as good, if not better than much graduate work I have read!”

Osterweil noted that “This made it incredibly difficult to pick one for the Eyre award. Ultimately we chose Jessye Halvorsen’s thesis, ‘A Case Study of the Global Brigades.’ The thesis represents an impressive exploration of the Organization Global Brigades, in particular with a view to understanding whether the organization’s claims to operating with a “holistic model”—that incorporates not only medical brigades but also eight other programs (dental, water, public health, environmental, engineering, business, microfinance, and human rights)—did in fact avoid many of the pitfalls of volontourism and other development projects. We were particularly impressed with Jessye’s ability to weave fieldwork, analysis of literature and contribute an original piece of research to what is a still quite a nascent field of study.”

The three other outstanding students who received highest honors for their senior honors thesis in Global Studies are also pictured above. Thomas Gooding worked under the supervision of Professor Sarah Shields in the Department of History, writing a senior honors thesis titled “A Path to Peace or Oppression? The Anti-Normalization Movement in Palestine and Israel.” Zoe Zakin completed her senior honors thesis, “Disability Rights as Social Movement in Argentina,” with Professor Neel Ahuja in the Department of English and Comparative Literature as her faculty supervisor. Read more about Zoe Zakin here.

Sara Khan wrote her senior honors thesis, “White School Uniforms and Development Theory: How Menstrual Hygiene Management Became an International Issue for Female Education,” with the guidance of Professor Amanda Thompson in the Department of Anthropology. Sara Khan also received the Anne Scaff Award for Service to the Curriculum and the Internationalization of the University. This award recognizes a graduating senior who has established a distinguished record of commitment to and raising awareness of global issues on campus. Read more about Sara Khan here.

We were also delighted to learn just before commencement that our newest faculty member, Assistant Professor of Public Policy and Global Studies Brigitte Seim (formerly Zimmerman) was a Spring 2016 recipient of a SUTASA Undergraduate Teaching Award. The award honors faculty who provide excellent instruction and mentoring, both inside and outside of the classroom. Nominations noted her hard work, the respect and trust her students developed for her, and her skill at engaging students in a large lecture setting. Read our story about Professor Seim here from our Fall 2015 newsletter.

See below for more photos and a brief video of the “especially UNC” recessional from our spring 2016 Global Studies commencement.