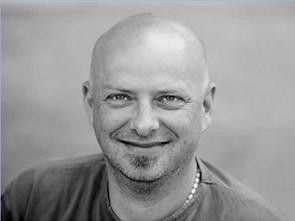 Author Hubert Klimko-Dobrzaniecki will read from his recently published novel Lullaby for a Hanged Man. The reading will be followed by a discussion with the book’s translator, Julia Sherwood.

Lullaby for a Hanged Man tells the story of three East Europeans—a Polish musician, a Croatian artist, and a budding Polish writer (the author’s alter ego)—trying to build a new life for themselves far from home, in dark and cold Iceland. Dedicated to the author’s friend, the composer and violinist Szymon Kuran, this sensitive exploration of friendship, love, insanity, as well as a depiction of the immigrant experience and an artistic and spiritual quest, is by turns wildly comic, moving, and poetic.

Hubert Klimko-Dobrzaniecki is the author of several novels, novellas, and collections of short stories. After studying theology and philosophy and traveling around Europe, he spent 10 years living in Reykjavík, studying Icelandic language and literature, and trying his hand at a variety of jobs and writing. His books have been translated into ten languages and, as might be expected from his itinerant lifestyle, are set in a number of countries, from Iceland, UK, Austria, and Denmark to Greece and Poland. A recipient of several Polish and French literary scholarships, Hubert Klimko-Dobrzaniecki has been nominated or shortlisted for a number of Poland’s top literary awards, including the Nike; the Cogito Public Media Award; the Angelus Central European Literature Award; and the prestigious “Passport” prize awarded by the weekly Polityka. He lives in Vienna.

Julia Sherwood was born and grew up in Bratislava, then Czechoslovakia, and now lives in London. After studying at universities in Cologne and Munich she settled in the UK, where she spent more than 20 years working for Amnesty International. Since 2008 she has worked as a freelance translator from English, Czech, Slovak, German, Polish and Russian into Slovak and English. Her book-length translations into English include Samko Tále’s Cemetery Book by Daniela Kapitáňová, Freshta by Petra Procházková, and, jointly with Peter Sherwood, The House of the Deaf Man by Peter Krištúfek and Ilona. My Life with the Bard by Jana Juráňová.

This is event is co-presented with the UNC Department of Germanic and Slavic Languages and Literatures and the Polish Cultural Institute in New York.